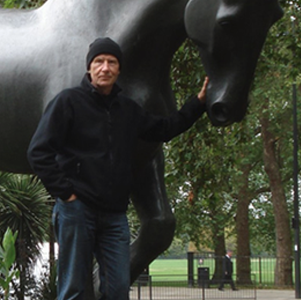 I was born in Germany, came to Canada at 13 and did the rest of my growing up in Smithers, BC. Went to UBC, travelled, got married taught school a few years and then moved to Pender Island where we bought the General Store and ran the post office, and where our two girls, Glynis and Lara, were born. At 5 Glynis fell in love with her first pony, Lara a couple of years later. That launched our horsey life. We left the small island, moved to the big island, bought a farm in Central Saanich with horses (of course), sheep, chickens, dogs and cats – the whole catastrophy. And I became a horse dad, the kind who doesn’t ride (except for the very occasional trail ride when there happened to be an extra horse available) but does all that other stuff, lots of chores, haying, fences, trailering, going to shows and events, looking after the chickens and sheep and trying to make enough money to pay for it all. And I loved it.

In 2005, just about the time I retired, Glynis saw an opportunity to open the Greenhawk Vancouver Island store and I came along for the ride. And so far it’s been a great ride.

We’re back to our regular hours: