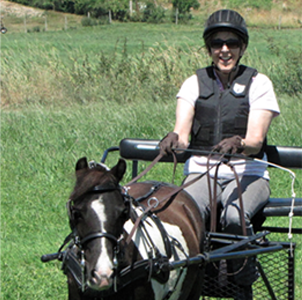 I lived in the Yukon for close to 30 years before I moved to Victoria. I did a lot of backcountry riding
If I ever moved to the south I wanted to become a schooled rider, so I began lessons at the age of 45 with all the teenagers, I had to check my ego at the gate. When I moved to Victoria I started to take more lessons, began to show and bought my first horse. I showed in the hunter/jumper ring with After Dark and Defining Moment, my two horses.

Recently I fell in love with driving and discovered Miniature Horses. I have a miniature named Jack Sparrow and a Shetland/mini cross named Katie. I’ve been a member of the BC Carriage Driving society and I compete in Combined driving with Katie and Jack works as a fashion model, making his debut in the Greenhawk catalogue.

When Glynis and I first talked about opening a Greenhawk franchise we thought it was a really new and exciting idea and saw it as a way to help serve the equestrian community we love and care deeply about.

We’re back to our regular hours: